First, let’s take a look at the front panel (see Figure bellow). The front panel can be divided into 5 sections: Inputs and Outputs (A); Performance Controls (B); Keypad (C); Sample Editing Matrix (D), and  Analogue Isolator (E). There is also a 4-digit display that the Volca uses for talking to you. 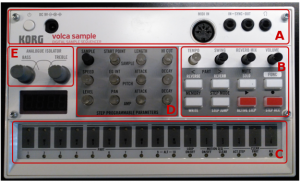 Nothing fancy in this section: there is a power button on the far left, and an insert for the Power Adaptor right nest to it (the power adaptor doesn’t come with the unit, but you can power it using six AA batteries). I use a standard power supply with a 4mm plug (yellow tip), 9V, centre pin positive with at least 1.7 or 2 A of maximum current on the secondary.

On the right side of this section you have a MIDI In port (standard 5-pin DIN). Unfortunately the MIDI capabilities of this device are rather limited (or rather expansive, depending on what you wish to do). Covering it’s MIDI implementation will take a whole tutorial on its own, which I intend to do soon.

To the right os the MIDI port there is a pair of 3.5mm (1/8″) jacks for syncing with the other Volcas. To the far right there you can find the audio output also on 3.5mm stereo jack. This device has some stereo functionality, so you really want to have both channels connected to your amplifier or recording setup. My recommendation is to use a simple 3.5mm stereo jack male-to-male cable for connecting it to other stereo mini-jack inputs. Or use a 1×3.5mm TRS jack to 2×6.35mm TS jacks cable for connecting to 1/4″ jack mono-inputs, like the ones found in most USB-Audio Interfaces, like the FocousRite Scarlett 2i2 I use.

On the right-hand side of the device there are two rows of buttons toped by a row of four knobs. These are the performance control/main control area of the synth.

The four knobs (from left to right) control the Tempo, Swing, Reverb Amount (listed as Reverb Mix) and Master Volume. Some of these concepts will be developed in later tutorials. The tempo knob blinks in time with the current tempo setting, serving as a visual (and not very effective) metronome. As for the buttons, starting from left to right and top to bottom, you have:

Using the function key, these buttons will have different, usually more advanced, functions (written in white on the panel):

The Volca Sample used both the Keypad and the display to show information on its current status, the part selected for editing, which parts are muted, or soloed, or using reverb, etc.

The keypad can also be used to play the instrument live (using pads 1 to 10). Together with the [FUNC] key, it can be used to clear the working memory, or parts of it; and to set each sample to loop indefinitely while active . This later facility is very useful if you are interested in doing some wavetable or granular synthesis with this device. These functions will be explored during these tutorials.

The Sample Editing Matrix takes the lion’s share of the real estate on the front panel. It lies inside a grey rectangle with the caption “Step Programmable Parameters”, which also hints at the possibility it offers to record automation (or Motion Sequence, in Volca parlance) for each of these parameters, on 11 of these 12 knobs.

On the second row you can adjust the pitch of your sample. This is done by adjusting the playback speed, using its dedicated knob or by applying an Atack-Decay (AD) envelope with positive or negative intensity. No time-stretch facilities exist on the Volca.

Finally, the third row of knobs controls the amplifier section of each part. Here you can adjust the volume, the stereo pan and also edit a simple amplitude AD envelope.

These features will be explored Tutorials 2 and 3.

Finally, at the very end of the sound processing chain, the Volca Sample offers an Analogue Isolator. You can think of it as a very simple EQ with a low shelf and a high shelf (I’ll try to measure their cut off values in the future). This is a simple two knob affair, that can boost your basses and/or your highs from -6dB to +6dB. There is no way to make a specific part bypass this stage, or record its automation.

On the next tutorial, we’ll see how to record and edit patterns in the Volca Sample.