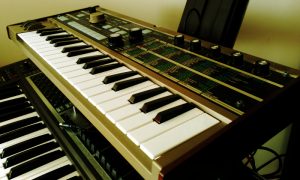 I Love the MicroKorg!

My Microkorg was a birthday gift from myself in 2015. It is one of those synths that sounds larger than what it looks and is more valuable than what it costs. Before buying it I spent a lot of time considering between this little beats and the more evolved MicroKorg XL+. Yes, the XL has the same engine of the Radias, which is to say it is possibly one o the best VA synths out there. But it is not a Radias in the same sense (or perhaps even more) that the MicroKorg is not an MS2000. The more complex synthesis engine of the XL hides behind a simpler interface than that of the original MicroKorg, making it much more difficult to program, unless you use the software editor.

On the other hand, the original MicroKorg has a parameter matrix, which is a great way to have something between one-knob-per-function and not having a massively large and expensive interface on the front panel. It takes a little bit to get used to, but with enough practice you start to not even reading the small print on the front panel, and know your way around the engine by heart. At least that is my experience. Also, if you are planning to have something from Waldorf (like the Blofeld or the Pulse 2), you should thank Korg for making a simpler engine with this interface. ;)

Now, for the patches (after all, that is possibly why you are here): there is a software editor from Korg, which is very prone to fail, and has an awkward interface. There are also a couple of lesser editors (either stand alone or VST). All of them use the SysEx implementation documented in the Manual. Indeed, it is quite easy to make backups of the MicroKorg, and its patches (at least on Linux), using a MIDI recorder and SysEx messages. Interpret the dumped patch, however is much more difficult (at least for humans, microkorgs have no problem with it). That is why most MicroKorg patches end up being shared in text form, much like those BASIC programmes of the 1980’s. Some examples of this can be found on the Microkorg cookbook website, and on the pages leading from the listing bellow.

This is a list of my current patches. They are all given under a Creative Common Attribution license (licensing details for each patch). In general, you are free to use them in your work, and make derivatives of it, but I’d thank you if you could give me credit for this by placing a link either to the patch page, or to this page, or to the YouTube video demonstrating the patch, or to my Youtube channel.