Like its older brother Volca Beats, the Volca Sample has three modes for recording or editing a pattern: Step Record, Step Mode and Live Recording. Because the keypad is going to be used mainly for programming the sequencer and not for any of its extended functions, each key on it will be referred to by its number (Keyn). This text is essentially a more verbose explanation of the video tutorial I published on YouTube in September 2015.

Let’s start with some basics. A pattern is a sequence of 16 steps, and the Volca Sample can sequence up to 10 samples at a time, so it’s a 10-part sequencer. So we can see the sequencer as a 10×16 squared piece of paper were we punch wether a sample (part) is playing or not (see Figure bellow). On top of that, the sequencer also stores the automation for a number of parameters, which we will cover in a later tutorial. 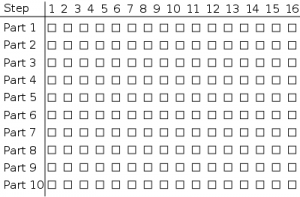 The Sequencer can be initialised by pressing [FUNC]+[Key16] ([CLEAR ALL]). This removes all pattern data for all parts as well as any automation. It also clears any Active Step, so all 16 steps are now active.

You can enter Step Record Mode by pressing [FUNC]+[RECORD]. The two buttons will blink and the display will show “S.rEc”. This mode allows you to record your pattern one step at a time. The lower line of LED’s in the key pad indicates which is the current step, while the upper line of LED’s shows which (if any) parts are triggered in the current step.

You can select multiple parts at the same time (like playing a chord), although the time tolerance of the Volca is somewhat small, and some parts may end up recorded on the following step(s). To insert a pause, press [RECORD].

After recording step 16, you are back at step one, and still in Step Record Mode, so you can overdub your previous recording with more parts, which can make for some very interesting patterns when just pressing random parts.

Step Mode is the easiest way of recording a new pattern. You can enter and exit Step Mode by pressing the [STEP MODE] button. In this Mode, the lower line of LED’s in the key pad show which part you are editing. You can navigate trough parts using (you guessed it!) the [PART <] and [PART >] keys. For each part, the upper row of LED’s in the key pad shows the steps in the current part is triggered.

In step mode, you can place your pattern as if you were reading a pattern card like the one shown above. You can also use Step Mode while the sequencer is playing.  This allows for some quick programming/editing on-the-fly.

Most times, I start my patterns with a basic rhythm using only one or two parts that I program in Step Mode (for example, a 4 on the floor).  This gives me a good rhythmic base on top of which I can record more elaborate patterns in Live Mode

Live Mode is the default state of the Volca Sample. This mode allows you to play each of the 10 parts freely (ad lib) using the keypad. There are three different ways to record in live mode.

Recording in Live Mode always quantizes what you are playing to the closest 16th note. Like in Step Record, the instrument will continue recording from step 1 after finished the sequence. To exit Live Recording mode, you can either press [RECORD], which will leave the new pattern playing; or you can hit [PLAY], which will also stop the sequencer playback.

Sometimes quantization (or your fingers) does not work like it should and some parts may end up triggered off beat. You can switch to Step Mode and make your adjustments without stopping play back (good for live performances). :)

In the next tutorial we will take a look on the Sample Editing Matrix and how we can use it to do anything from adjusting loudness and pitch to granular synthesis.