In the previous tutorial we saw how to record simple patterns on the Volca Sample. This tutorial is a rundown of the controls you can use to modify the sound of each of your samples. This text is a more verbose explanation of the video tutorial I published on YouTube in September 2015.

There are four “places” you can use to modify each sample: the Sample Editing Matrix; the [REVERSE] and [REVERB] menus, and the LOOP on/off switch.

The Sample Editing Matrix is the grey area at the centre of the front panel (labelled STEP PROGRAMMABLE PARAMETERS) shown in the Figure bellow. It is composed by a rotary encodes (SAMPLE) and 11 knobs. Each knob has a little notch which is barely useful as an indicator of the parameter’s value. Fortunately, moving each knob shows the codified value (from 0 to 127 or -63 to +63) for that parameter in the display, and recording these values is actually a better way to save a configuration rather than noting the position of each knob. 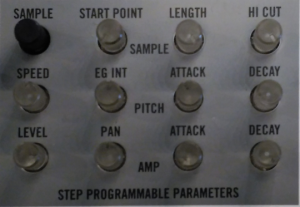 The Sample Editing Matrix always acts on the selected part, and not as a global setting. In both Live and Step modes, the active part is indicated by a lighten LED on the lower row of LEDs in the keypad.

The first line allows you to edit general settings for each sample:

The second row is dedicated to controlling the pitch of the sample, this is always accomplished by changing the playback speed, so increasing the pitch decreases playback duration, and vice-versa:

The third row of the Sample Editing Matrix controls the amplitude of each sample.

The revers menu can be accessed by pressing [FUNC]+[PART<], you’ll have to keep the [PART <]/[REVERSE] button pressed to be in this menu. You can select which part is going to be played in reverse. when in the Reverse Menu, the parts for which the upper LEDs are on will be reversed (played from end to the beginning).

The START POINT and LENGTH knobs take precedence in the signal path, so the Volca will only reverse the section of the sample that is selected for playing. This means the same sample region selected to play in the original direction will be played when that part is reversed.

The Volca Sample allows you to add a reverb as an insert effect for each part. This is nice, because you usually don’t want to add reverb to every part playing. However, the amount of reverb (the Dry/Wet mix) is set universally for all parts using the REVERB MIX knob.

The reverb menu can be accessed using the [FUNC]+[PART >] combination. As with the Reverse Menu, you have to keep the [PART >]/[REVERB] button pressed. When this menu is active, the parts affected by the reverb processor will show their upper-row LED lit, and you cans select them on or off by hitting their corresponding pad.

The LOOP ON/OFF switch is found at the 11th pad of the keypad, and can be modified using the [FUNC] button. It affects only the selected part, which can be set to loop (LED lit) or play one one time (LED off).

Granular synthesis is a basic sound synthesis method that operates on very small time scales. By setting LENGTH very close to 0, your sample duration can be in the mili- or micro-second range. Then, by activating LOOP you can generate a new waveshape, which would be equivalent to an oscillator in a subtractive synth. The filter can be used to attenuate some of the high frequencies, and the pitch and amplitude facilities can also be used to shape new sounds, as exemplified at the end of the video.

In the next tutorial, we’ll see how we can add movement using the settings on the Sample Editing Matrix and Volca’s ability to record automation.

This website uses cookies to improve your experience while you navigate through the website. Out of these, the cookies that are categorized as necessary are stored on your browser as they are essential for the working of basic functionalities of the website. We also use third-party cookies that help us analyze and understand how you use this website. These cookies will be stored in your browser only with your consent. You also have the option to opt-out of these cookies. But opting out of some of these cookies may affect your browsing experience.
Necessary Always Enabled

Any cookies that may not be particularly necessary for the website to function and is used specifically to collect user personal data via analytics, ads, other embedded contents are termed as non-necessary cookies. It is mandatory to procure user consent prior to running these cookies on your website.